An end to the aging of the population? What the new numbers on life expectancy could mean 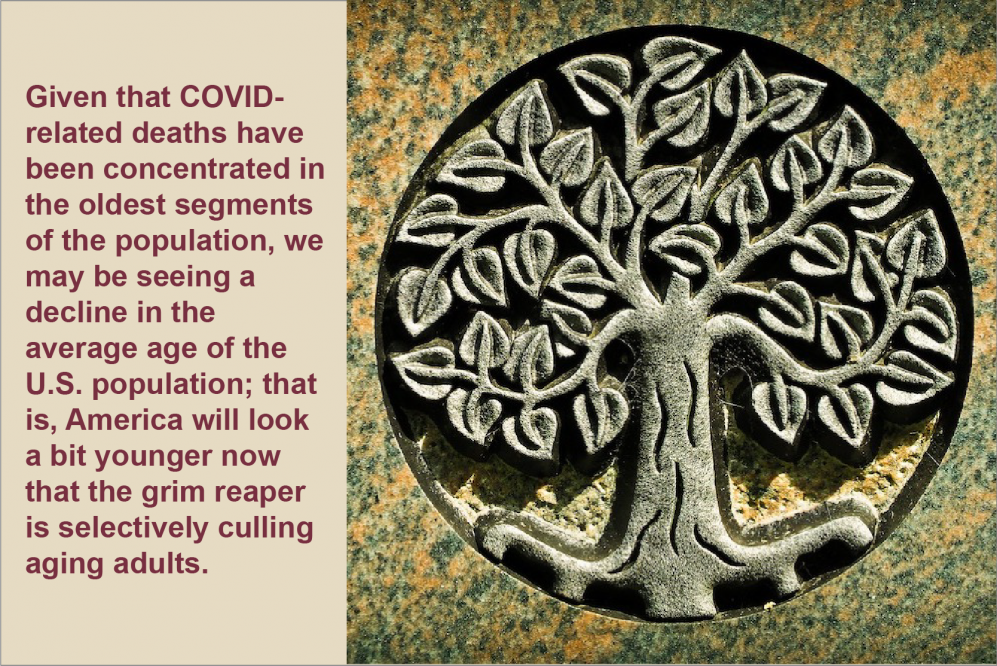 The Centers for Disease Control and Prevention and the National Center for Health Statistics recently released estimates for Life Expectancy at Birth in the United States for 2020: https://www.cdc.gov/nchs/data/vsrr/VSRR015-508.pdf.  As might be expected during the COVID-19 pandemic, the figures are grim.  We have lost about 1.5 years of life expectancy, with subgroups such as Latinos and African Americans experiencing even worse declines: 3 years and 2.9 years, respectively.  COVID-19 is attributed around 74 percent of the loss in life expectancy, though again that varies by subgroups with 69 percent of the loss attributed for males, 80 percent for females, 90 percent for Latinos, and 59 percent for African Americans.  The second most important factor in declining longevity was a continued increase in accidental deaths such as due to drug overdoses (the opioid epidemic).

Now, to put this in context, during the last pandemic, the Spanish Influenza in 1918, over 11 years of life expectancy at birth was lost, in part because, unlike for COVID-19, younger adults died disproportionally compared to older segments of the population, and there weren’t very many older adults in the population at that point in time.  Soon after that pandemic petered out, almost all of the losses were regained, and people can expect a similar recovery effect this time, too.

There are interesting potential side effects here.  Given that COVID-related deaths have been concentrated in the oldest segments of the population, we may be seeing a decline in the average age of the U.S. population; that is, America will look a bit younger now that the grim reaper is selectively culling aging adults.  Similarly, given differential losses in populations of color, our population may be becoming somewhat less diverse.

However, at the same time, birth rates have declined during COVID-19 by about 4 percent from the prior year https://www.cdc.gov/nchs/data/vsrr/vsrr012-508.pdf, potentially countering the trend to have a less strongly aging population.  That is contrary to expectations by some that bored couples, locked down at home, might lead to more births.  Were there too many other forms of entertainment available to pick up the slack, with all the media streaming from the Internet these days?  Actually, declines were expected, based on the usual pattern of declines in fertility that accompany economic downturns, such as in the Great Recession, and before that, the Great Depression.  With shutdowns, economic prospects do not look good, and women were apparently deciding that “now may not be a good time to consider bringing a new child into the world.”  With more effective birth control available since the widespread distribution of the pill in the 1960s, women can safely have sex without having babies, so even if sexual activity happened more frequently during lockdowns it would not necessarily lead to more babies.  Some studies report that sexual activity also declined during the pandemic, probably due to increased stress levels in households.

So, if we put those two trends together, rapidly declining life expectancy coupled with less steeply declining fertility, we may be seeing a slight pause in the rapid aging of the population, both in the United States and worldwide.  We’ll have to wait for final figures to be released.  In the interim, as the saying avows, we continue to live in “interesting times.”