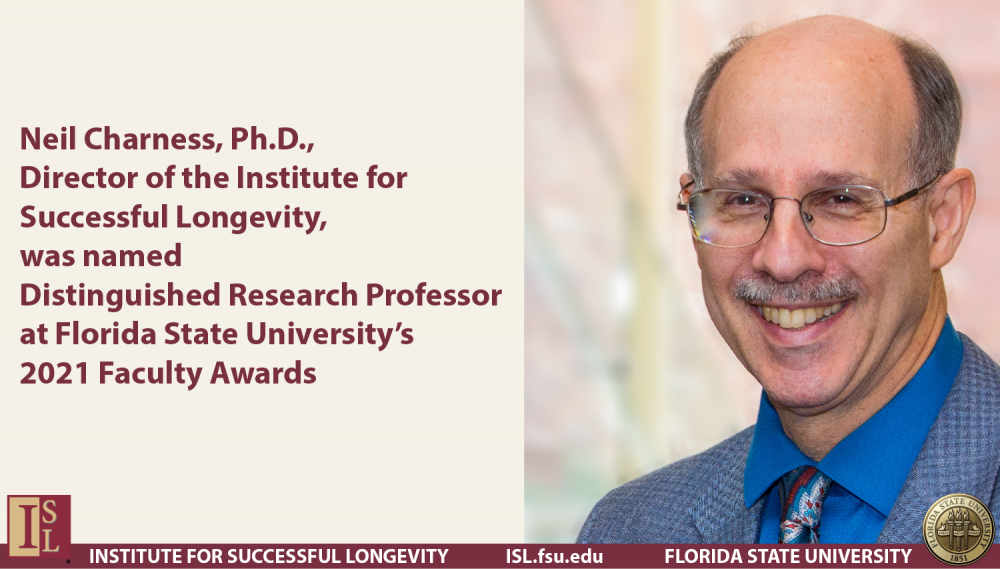 Neil Charness, Ph.D., the William G. Chase Professor of Psychology and director of the Institute for Successful Longevity, was named Distinguished Research Professor at Florida State University’s 2021 Faculty Awards ceremony Thursday. Charness received the honorary title of “Distinguished Research Professor” and a one-time award of $10,000. The designation recognizes and honors outstanding research, scholarly and creative activity among FSU faculty having national and international visibility and the rank of full professor. “Neil Charness is an elite scholar who has profoundly shaped our understanding of the science of successful aging,” said Frank Johnson, chair of the Department of Psychology. “He is known internationally as one of the most influential minds in his field, bringing great distinction to Florida State University.  That Neil is also one of the kindest and most thoughtful people you will ever meet makes this moment even more joyful!”

“I am honored that my peers have recommended me to join the ranks of the Distinguished Research Professors at FSU,” Charness said.  “The award is testimony to the many exciting and fruitful research collaborations I’ve enjoyed with my students and colleagues.”

The award is sponsored by the Council on Research and Creativity in FSU’s Office of Research Development.

This year the ceremony was held virtually. Also at the award ceremony:

— ISL Faculty Affiliate Thomas Joiner of the Department of Psychology received a Graduate Faculty Mentor Award, as did four other FSU faculty members, from the Graduate School. The honor includes a $3,000 award. Joiner also is a Robert O. Lawton Distinguished Professor, the highest honor the FSU faculty can bestow on a colleague, a distinction he received in 2010.

— ISL Faculty Affiliate Yan Li of the FAMU-FSU College of Engineering received a Developing Scholar Award, as did three other faculty members, from the Council on Research and Creativity. Li’s award provides $10,000 to be used in the coming year to promote her research.

Charness’ research centers on understanding the aging process and its implications for technology use (particularly for health), work performance, and expert performance. He also conducts human factors research on older driver and pedestrian safety. These research projects are being funded by the National Institutes of Health/National Institute on Aging, and the U.S. Department of Transportation and the Florida Department of Transportation.

Charness has published more than 200 journal articles, book chapters, proceedings papers, and technical reports, and also co-authored books on Designing Telehealth for an Aging Population: A Human Factors Perspective; Designing for older adults: Principles and creative human factors approaches (3rd Edition); and Designing for older adults: Case studies, methods, and tools. He is a Fellow of the American Psychological Association, the Association for Psychological Science, and the Gerontological Society of America. He received the Jack A. Kraft Innovator award, the Franklin V. Taylor Award, the M. Powell Lawton award, the APA Prize for Interdisciplinary Team Research, Grandmaster of the International Society for Gerontechnology, and APA’s Committee on Aging award for the Advancement of Psychology and Aging.