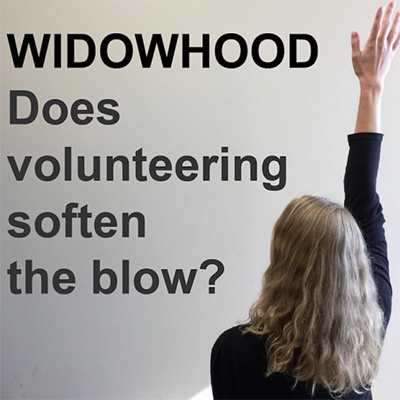 When I was in college, my mother died during my junior year following a two-year struggle with cancer. As difficult as it was for me to lose her, my dad was in his early 50s and had to face changes in his life that were well beyond my comprehension as a 21-year-old. My mom and dad had been married 31 years when my mom died, and they had been together since the eighth grade. It’s hard to believe anyone could recover from something like that. And the truth is, not everyone fully adjusts to widowhood. So, why do some people do better than others?

If we get married and manage to stay married into old age, we can and should expect to become widowed at some point. Only about one in 10 older men report being widowed. This is because they tend to marry women who are younger, they have lower average life expectancy, and, they are more likely to remarry following widowhood.

Even though widowhood is more common among women — over 1/3 of older women report being widowed — men, on average, tend not to adjust as well as women.

To better understand why some people fair better than others, it is helpful to consider the factors that make widowhood especially difficult. Perhaps most obvious, widowhood is difficult because it makes us feel sad— we miss our spouses after they die, and we feel sad because someone who has been in our lives for a long time are no longer with us. But, the deep sadness that comes with new widowhood can be short-lived. So, we have to consider the range of factors that have a long-term impact.

When we lose our spouse, we have to take on all household chores without the help of another person, we no longer have someone to help care for us, and we might lose an important source of income, leaving us without the ability to get help from others if we need it. However, perhaps the most concerning problem relates to social interactions. When a spouse dies, we no longer have someone available to talk with, to share our intimate experiences with on a daily basis.

For older people, this is accentuated by the fact that most people over age 65 are retired and do not have a work environment in which to interact with others on a regular basis. As a result, it is common for widows to be fairly socially isolated and subsequently, to become lonely. Persistent loneliness is not only unpleasant, research shows that it has significant effects on our health; in fact, it has a similar effect on mortality risk as smoking!

When it comes to aging well, or aging “successfully,” research suggests that those who enjoy the best health and wellbeing in old age avoid getting chronic illnesses, maintain high cognitive and physical functioning, and stay engaged in life. One reason that staying actively engaged, such as in activities like volunteering, is beneficial is that these sorts of activities usually involve interacting with others in ways that are meaningful and productive, which creates a sense of social connectedness. But, even though feeling lonely means that we feel disconnected from others, can engaging in activities that help build a strong sense of connectedness with others be the anecdote when it comes to a time when loneliness persists?

In a recently published research study, my colleagues and I explored whether volunteering impacts how well people adjust to widowhood. We found that individuals who started volunteering after they became widowed, and engaged in at least two hours per week experienced no greater loneliness than their continuously married counterparts. In other words, volunteering did seem to provide an anecdote for persistent loneliness following widowhood, but only for those who committed to regular engagement.

As noted earlier, research has suggested that men tend to experience greater detrimental effects to their health following widowhood. Some researchers have proposed that one reason men struggle more is because (current cohorts of) older men are less socially embedded than women are in later life. My colleagues and I were interested in exploring what factors were associated with better outcomes for men, and in another recent study, we looked to a common early life experience among current older men — military involvement.

About half of all older men today served in the military. We were interested in whether involvement in the military, an institution that creates a ready social network with shared experiences, left a lasting impact on men’s ability to recover from widowhood in later life. We discovered that the military itself did not provide men with better outcomes, and we discovered a counterintuitive finding. The men who had been exposed to death while serving in the military experienced no increase of loneliness following the death of his spouse, a relationship that was unexplained by the social networks that the men engaged in.

We hypothesized that having experienced a death earlier in life may have given the men experiences, tools, and potentially emotional resources from which to draw when faced with widowhood later on.

Although it is not possible to draw conclusions about the results of our research, and further research is certainly needed to figure out what specific factors set people up to handle the loss of a spouse in our later years, our research does suggest a few things that might help.

First, regularly engaging in volunteering is known to be associated with a range of other health and well-being benefits, even in the absence of widowhood. For instance, volunteering on a regular basis is associated with benefits such as decreased depressive symptoms, enhanced functional health, and decreased risks of mortality. As a result, if you become widowed, picking up a new volunteer job and engaging on a regular basis a few hours a week may not take away all of the pain and challenges you will face, but it is unlikely to cause you harm.

Second, it may be possible to accumulate emotional or social resources that help us more effectively handle the consequences of experiencing widowhood. Although no one would choose the unlucky path of having a major loss early in life, it may be possible to learn important skills in other ways that help us to be more resilient when we do experience difficult situations like becoming widowed.

The findings from our study are limited to men in the military, so we plan to complete further research to help us better understand the unique circumstances that the military provides for handling difficult life events, and also learn how these findings extend to others, including women, who haven’t served in the military.