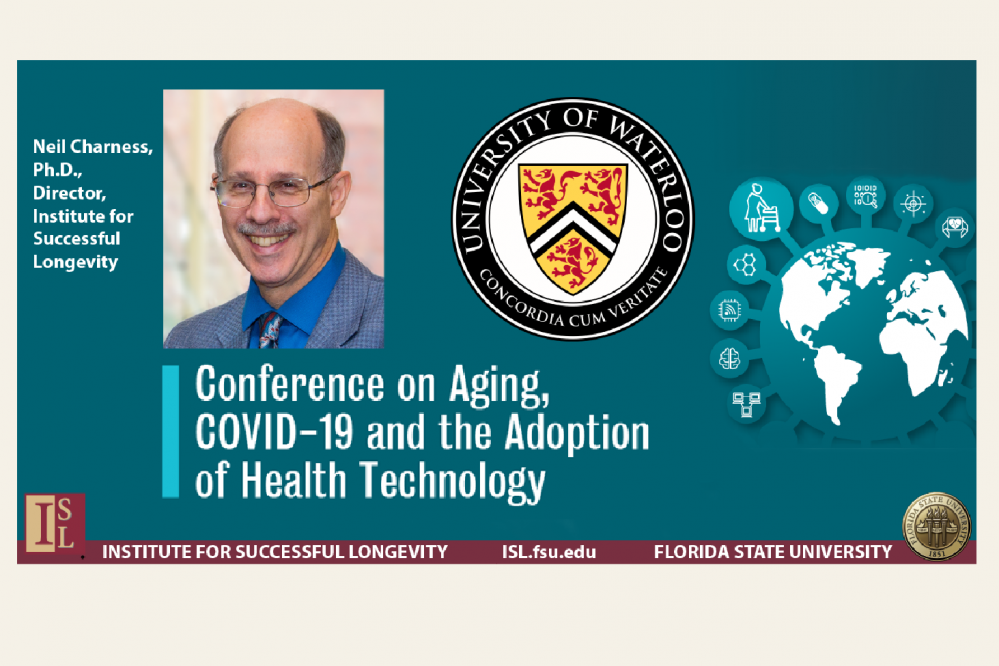 Technology’s role in helping adults remain active in their senior years has great promise, but there remain significant limits that must be addressed before widespread adoption and use, Neil Charness, Ph.D., Director of the Institute for Successful Longevity, said in the keynote address to the University of Waterloo’s Virtual Conference on Aging, COVID-19 and the Adoption of Health Technology.

Charness joined other aging and technology researchers, clinicians and frontline workers, members of advocacy groups, policymakers, and other speakers who contributed to the two-day (March 24-25) virtual event.

In his address, Charness spoke of the promise and limits of technology to promote successful longevity and asked participants to consider two concurrent revolutions of modern life: the widespread expansion of life expectancies and the rapid diffusion of new technologies.

People are living much longer than they were just a few generations ago, Charness said. “That’s what we call the longevity dividend,” he said, “the fact that the children born today can expect to live in the world about 25 years longer than they could only 70 years ago.”

Concurrent with this expansion of longevity, Charness said, was an accelerated diffusion of technology. “When you put these two together, in this case the aging revolution and the technology-diffusion revolution, unfortunately we see that older adults are still lagging,” he said. When we look at Internet use, Charness said, we can see that lag clearly. “About a quarter of older adults, 65-plus, in the United States, are still not on the Internet,” Charness said.

Charness explained the framework he developed for viewing technology’s role in successful longevity, which he terms PRAS: Prevent impairments, Rehabilitate, Augment (support a failing function), and Substitute (replace a failing function, such as hearing). In his address Charness applied the PRAS framework to a number of points of intersection of technology and older adults, such as the controversy over claims for brain-training programs and the addition of advanced driver-assistance systems in new cars, and he noted the promise and the limitations of each.

Charness also looked at the issue of loneliness, which he said was a serious public-health problem. “The question we have is, can technology help, particularly now that everyone is suffering from social isolation, due to Covid?” Charness said. He reported the mixed results found through his own research in the CREATE PRISM project, which put technology — specially prepared computer tablets — in the hands of older adults. “The question is, are those types of tools effective?” His research team is pursuing that question with its PRISM II project.

Charness also told of the Institute for Successful Longevity’s Zoom initiative, which was launched to help older, isolated adults stay connected with friends and family in a time of stay-at-home practices and social distancing. Charness’ institute developed guides to show older adults how to use the online service to stay connected. “Zoom has great videos on their web site, but they are tough to follow if you are trying to use step-by-step procedures,” Charness said. The Institute for Successful Longevity created Zoom guides to fill that breach, he said, and the guides have been widely used. “So carefully designed, step-by-step instructions can help novice seniors get onto Zoom,” Charness said. “We coordinated with our Senior Center and provided them with mentors to help other seniors. We think that technologies that promote social participation can be helpful. I don’t think they can substitute for human contact … but they can be very useful.”

Charness also addressed the potential promise of autonomous vehicles, the self-driving cars that always seem just around the corner but have not yet entered the mainstream. He noted that current attitudes toward autonomous vehicles, primarily safety concerns, are not favorable among older adults.

Older adults are slow to take up other new technologies, too, Charness said, citing a Pew survey that found that three-quarters of those age 65 and older indicated that when setting up a new electronic device they needed help from others. “That’s an indictment of the design community,” Charness said.

In summary, Charness, said, “I think technology products and systems hold considerable promise for rehabilitating, augmenting and in some cases even substituting for age-related negative changes…. I think, however, there are some serious limits for technology adoption that probably produce the aging digital divide.”

Charness said the first is usability of the product systems offered. The second is the reliability of integrated human-system integration. Despite these persistent drags on technology adoption we can be optimistic, Charness said, and he ended his address with a family photo of his parents, ages 98 and 96, and their great-grandchildren. “My hope is that we are going to design better products for them [the great-grandchildren], so that they don’t fall behind as they get to same age as my parents.”